Now that React context has become more established in the community we are seeing a lot of great usages of it. Reflecting on a previous post about Higher-order components (HOC) vs Render props, I rarely use HOC and now generally choose between Context or Render props. With the introduction of hooks and in particular useContext hook, React context is more accessible and has become a go-to approach to solving complex state management. However, there are other options to handle these cross-cutting concerns and so we should be clear on why we are using context. Let’s explore why and how to use React context. 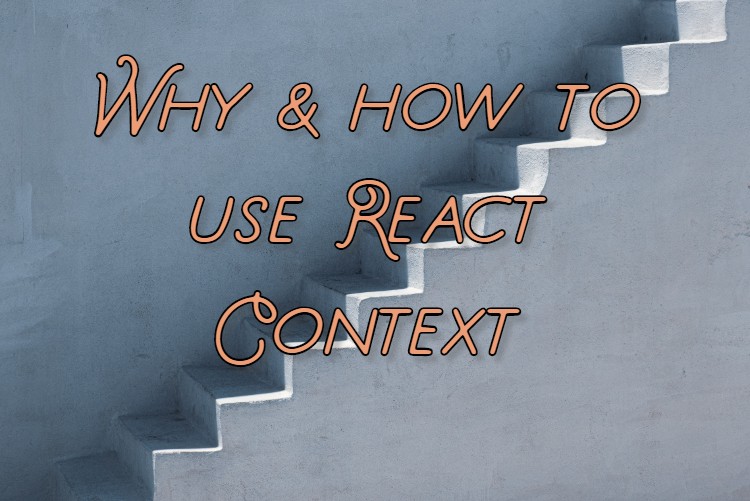 Photo by Stéphane Mingot on Unsplash

The React docs have an in-depth post covering all aspects of React context, but here I will provide a summary of it and how to use it.

What is the purpose of React context?

Context provides a way to pass data through the component tree without having to pass props down manually at every level.

For example, you might have a container component responsible for fetching user data that is consumed by several components further down the component tree. If you were building a profile page to show an avatar, there might be a navbar containing a dropdown which has an image element for the avatar. Further down the page, there is a profile wrapper and inside that a header component to render the avatar. The intermediate components don’t use the data, NavBar, Dropdown and ProfileWrapper, only pass the data along.

Passing data via props is a poor approach because:

React context removes these issues by:

The above examples could be regarded as global to an application. However, it does not mean context should be used only for global features. It can be used further down the component tree to manage the state of a complex feature. For example, a multi-step form where next questions are dependent on previous answers.

It does sound like React context can be used for anything, however there are other options for cross-cutting concerns which may be preferred. Context would be excessive for handling local state with a component tree of two or three levels. With the principle of keeping code easy to reason about here are other approaches:

How to use it?

I wrote a post in November covering manage complex state with React useReducer and useContext. This is where I first mention Context and it comes with a todo app coding example on CodeSandbox. I’ve decided to fork that sandbox and refactor it to have a better todo API in React context.

React context is made of two parts a Provider and a Consumer. The provider is where the values are defined that the consumer can access. Following the good practice of encapsulation we won’t expose the actual React provider but a wrapping component which will define the values. This simplifies the usage of ToDosContext and exposes essential parts of the API to be used. Below is a code example which exhibits this:

Following the same method of abstraction let’s not expose the dispatch function but instead provide the methods to manage the tasks, add, remove and mark:

From todo-context.js we can also export the consumer like so:

Let’s look at how to access and use the add action in the todo context. One option is to use the React hook useContext. This hook takes the ToDosContext and can access the actions, which are then destructed out. The add action is called in the handleSubmit function to add a new task. See snippet below:

Another option to control access to the consumer is to create a custom React hook using useContext, wrap some error logic like ‘expect todo provider to be present’. See code example below:

I hope this helps you use React context more effectively in your day to day coding. Comment on Twitter or below.